What is Cosmetic Gynecology?

“We have to reshape our own perception of how we view ourselves and our needs. “ - Beyonce

WHO defines health as “a state of complete physical, mental and social well being, and not merely the absence of disease or infirmity. “ Cosmetic Gynaecology is one of the emerging and innovative subspecialties of gynecology that includes both cosmetic procedures to enhance the aesthetics of vulvo-vaginal region, as well as functional repairs to restore sexual function following changes that occur post delivery and/or with aging. With increasing awareness about female genitalia, women around the world have started opting for cosmetic gynecology procedures, with the aim of improving the overall functionality of vagina and perineum, also enhancing their appearance. Initially cosmetic gynecology was done by plastic surgeons and other specialities, however recent scientific studies support the procedures done more efficiently by trained cosmetic gynecologists. We are one of the pioneers in cosmetic gynecologist in South Delhi. 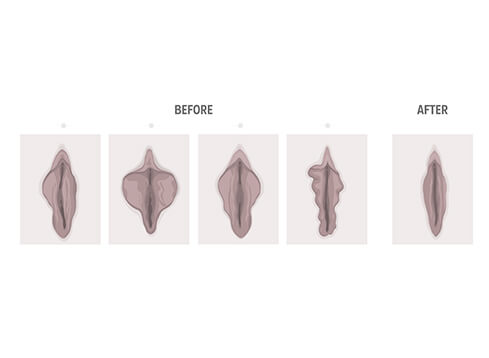 “Our lives begin to end the day we become silent about things that matter. “ Martin Luther King

We at Queen’s Gynecology are a brand of new generation gynecologists who respect all aspects of women’s health ranging from physical, mental, psychological and sexual well being. Since time immemorial, post delivery and /or aging aspects of female sexual health have continuously been ignored. However, with the changing scenario, we have to acknowledge and at the same time offer the best scientific treatments for the betterment of females. Cosmetic Gynecology is the most recent advance in gynecology that includes procedures to enhance the looks of female external genitalia, as well as functional repairs to restore sexual and urinary function following delivery and /or aging. We have the best vaginal tightening techniques in Delhi. 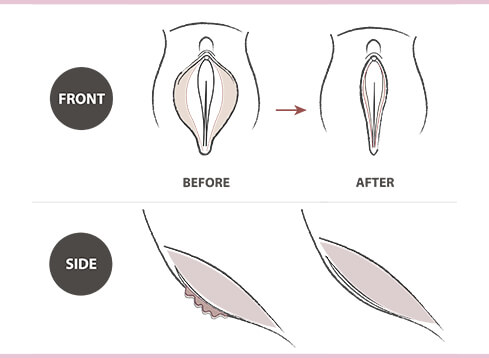 Vaginal Rejuvenation also called as vaginal tightening is performed to treat vaginal laxity commonly called as vaginal relaxation syndrome. Lasers have been used for Vaginal tightening since last 2 decades. Recently, new technology has been introduced in the field offering office based procedures to treat sexual dysfunction, mild urinary incontinence, and vaginal dryness. RF based lasers have been proven to be the mainstay of treatment as compared to CO2 based lasers. This is OPD based procedure that is relatively pain free. Results can be instantaneous or may require few more sittings.

For women with very lax introitus due to repeated child births and /or aging, several vaginal reconstructive procedures have been approved and practised by cosmetic gynecologists. These procedures involve repairing of posterior perineal muscles which play an important role in improving overall functionality of vagina, as well as improving appearance. They can be done as day care procedures and patient can go home same or next day.

Vaginismus is a condition involving a recurrent or persistence involuntary spasm of the muscle of outer third of vagina. It can make it painful, difficult, or impossible to have sexual intercourse, to undergo a gynecological exam, and to insert a tampon. Vaginal Botox injections for the treatment of vaginismus is an effective non surgical procedure done by trained cosmetic gynecologist. Botox injection can also use to treat vulvodynia, painful bladder syndrome, bladder muscle overactivity and chronic pelvic pain. Botox Treatment for Vaginismus is reliable, easy, effective, long-lasting, and life changing relief in painful sex. When Botox ix used along with vaginal dilators, the result of the Vaginismus treatment is even more overwhelming. In this process Botox is directly injected into the pelvic floor muscles or vaginal walls. After 7-10 days the Botox injection begins to show significant results. The patient then starts experiencing pain-less sexual intercourse. Overcome Vaginal Pain With Vaginismus Treatment with the help of in Delhi, India

Hymenoplasty is the surgical procedure for temporary restoration of the hymen. Hymen is a Greek word meaning “membrane”. Hymen is a membrane which partially closes the opening of the vagina and whose presence is traditionally taken to be a mark of virginity. This is a day care procedure and you can go home the same day and be able to resume normal activities.

Hymenectomy is a surgical procedure for removing part of hymen, which is performed in females with imperforate or septate hymen, hymenal hypertrophy and sometimes in vaginismus.

G spot also called as grâefenbergarea(for German Gynecologist Ernst graefenberg) , is a sensitive area on the anterior Vaginal wall, known for its erogenous and ejaculatory function. G spot augmentation is a simple non surgical treatment to enhance your sexual gratification.

O shot is a non surgical procedure that uses the growth factors each woman has in her own body to stimulate vaginal & clitoral rejuvenation to activate the female orgasm system.

Labiaplasty is a plastic surgery procedure used for altering the appearance of labia major and labia minor. The 2 main conditions in which this is done, are ambiguous genitalia and in restoration of labia for cosmetic reasons and difficulty during sexual intercourse. This is one of the most popular surgical techniques in the western world driven by female demands. Due to childbirth and /or aging, there is change in labial appearance, which can lead to difficulty in having sexual intercourse and can be cosmetically unappealing. This is a day care procedure done by cosmetic gynecologist.